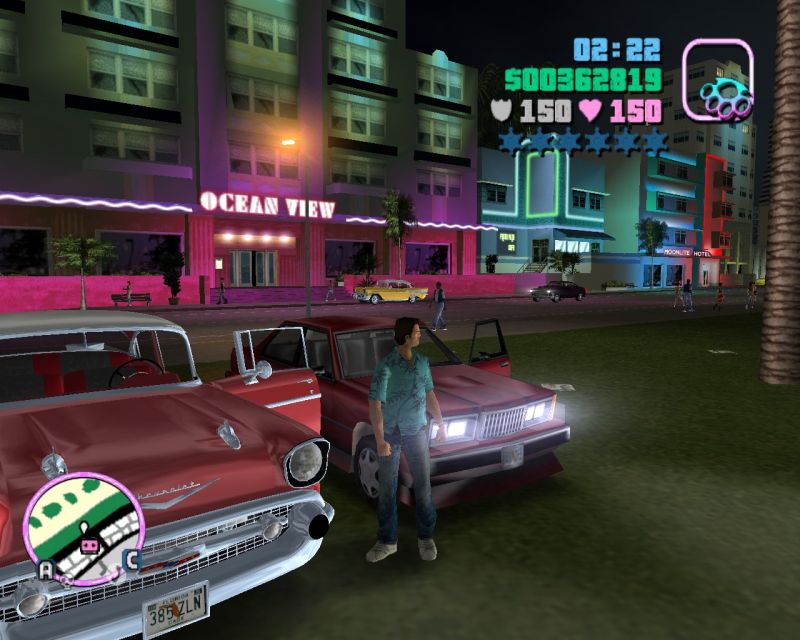 Glenster's Vice City Starter Package Steam Version Some of the last main story
missions
I used Glenster's Vice City Starter Package--Steam version--to do some of the
last missions of the game while demonstrating several gimmicks for them.
Missions: Kaufman Cabs (Cabmageddon), Printworks (Spilling the Beans, Hit the
Courier, and Cap the Collector), Assassination (Check Out at the Check In, Loose
Ends), Phil Cassidy (Gun Runner and Boomshine Saigon), and Vercetti (Keep Your
Friends Close).
https://youtu.be/rYHHsWaFAc8

Save game files for the Steam version of Vice City:

GTAVCsf1.b "In the beginning"  100 Hidden Packages have been collected and the
Paramedic, Pizza Delivery, Vigilante (Brown Thunder) Sub-missions are done.

GTAVCsf2.b "In the beginning"  Also the Fire Truck Sub-mission, all Rampages,
and PCJ Playground are done.

GTAVCsf4.b "In the beginning"  Also the work for Stores Knocked off and buying
(non-profit) property is done.

GTAVCsf5.b replaces the Minigun lost in "Phnom Penh '86."  The EP Admiral is
in the garage at the Leaf Links apartment building.

Tommy has never been Busted or had Hospital Visits.

Three Unique Stunt Jumps are done.  (I'm not sure which three.  I think two of
them are the Washington Mall parking garage jump and the first stairway jump of
PCJ Playground.)

The strategies and data folder modding suggestions, etc. of Glenster's Guide
to Some of Vice City, and mods of my VC starter package, are good for the Steam
version of VC as well.
http://www.gamefaqs.com/ps2/561545-grand-theft-auto-vice-city/faqs/33731
http://www.gtagarage.com/mods/show.php?id=12723

I've included Illspirit's Vice City Rampage/Package Finder Mod AKA Aurora
Borealis Over VC and Reverend Ted's GTA Vice City PC Havana Outfit Fix.  I
couldn't find links for them on the Internet.  You can delay "Two Bit Hit" for
Avery till after "Cop Land" and "The Job" to avoid the Havana Outfit glitch.

I couldn't get certain trainers or the Administrative Console to work for the
Steam version of VC.  But certain data > handling.cfg mods I came up with before
may help you:

If you make an Angel perform that way generally, make sure during "Alloy
Wheels of Steel" you have Tommy jack one of the Angels by the biker bar and not
one of the ones the other contestants have.  The game will boost those figures
for that mission on top of how you boosted them, and their Angels will have such
ridiculously strong cornering that it would be hard to drive one and you'd prob-
ably lose the race.

There is a gimmick you can use to fool the mission clock.  Have Tommy drive a
Sanchez to the entrance door of the mission.  There are various ways you can
have Tommy get his 'cycle into the mission, but the last time I tried it I used
Rusk's version: have Tommy get off the cycle and push it into the doorway until
the screen starts to darken for the start of the mission then have him get on
the cycle.  This can take some trial and error and repositioning of the Sanchez
to make it work.

After the cutscenes of the carnival-like setting are shown, you're back in
control of Tommy who's sitting on the Sanchez he drove in with.  A pink arrow
points down at the Sanchez intended for the mission--the timer won't start till
he gets on that one.  You can have Tommy drive through the glowing disks with
the Sanchez he went in with, but leave one disk for a real easy stunt.  Then
have Tommy get on the other Sanchez, starting the timer, and drive through the
remaining easy stunt creating whatever time you like.

You can even drive through all the disks before getting on the intended San-
chez, at which time the timer starts and stops in the same instant, creating a
time of zero seconds, although that looks a little absurd in your Stats.  Rusk
adds that a time of 0:00 will show up on your Stats, but won't count toward 100%
completion of the game.  So I'd use the gimmick for a small time, but not zero
seconds (unless you already got, or plan to later get, credit for the mission
with some other time).

How to be the only one in the Hotring

A variation you can try is to drive into the blackened alcove along the out-
side wall.  Back into the back wall with the passenger side against the side
wall.  Have Tommy get out, equip him with the Minigun, and have him blow up the
other contestants.  One choice then is to drive the race uncontested--you won't
have as fast a time as the regular way, but you'll come in 1st.

Another choice is to go back into the alcove and you'll see a car flashing on
and off.  This represents your replacement contestants you've blocked off trying
to get out to the track.  (When you drive the race normally, you can get smacked
by them flying out of this alcove.)  If you have Tommy shoot the Minigun at it
you can get hundreds of Tires Popped with Gunfire in your Stats in a minute.

(Thanks to spaceeinstein's web site for these Hotring variations.)

See my VC starter package (not Steam) for the 1957 Chevrolet Bel Air by
Klarnetist I worked on.  I made the Hermes handle a bit better, too.
http://www.gtagarage.com/mods/show.php?id=12723

As always I recommend making a folder for the game on a storage drive to save
mods, etc.

These safe games are for the main story missions except the first one.

* Three Unique Stunt Jumps are done.  For 100% complete the rest of the Unique
Stunt Jumps, get first place for Hotring, make at least $10,000 for Bloodring,
and score at least 45 for Rifle Range.

See Glenster's Vice City Steam Save Games for the first save games of these
sessions.  Those save games are of the first main story mission--"In the Begin-
ning," the side missions available at the start of the game, second place in the
Hotring Race, one minute in Bloodring, and three of the Unique Stunt Jumps.