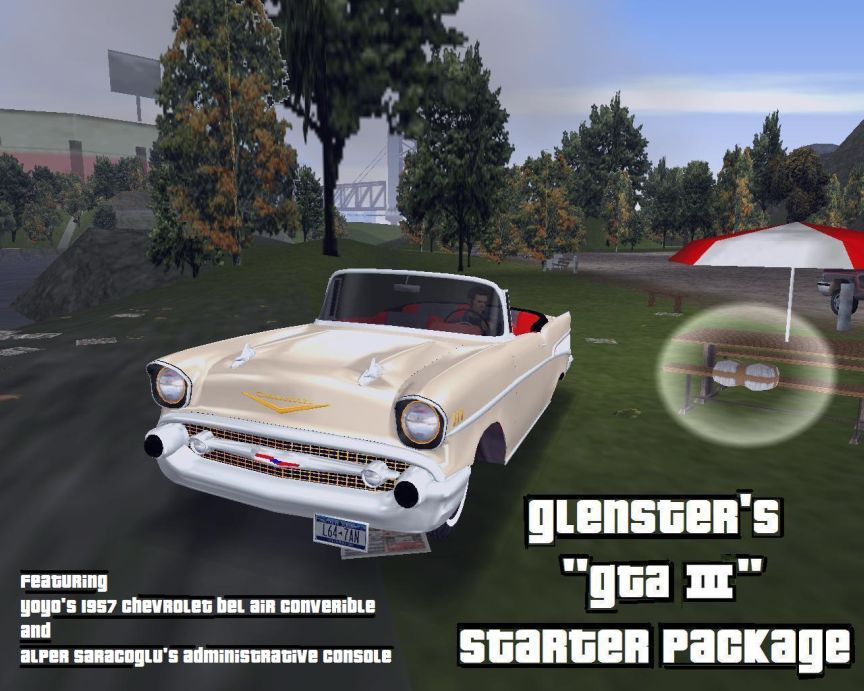 I didn't write a walk-through for the PC version of "III" so I added more
stuff to my starter package for it.  This includes

- a starter save and some subsequent saves up to 100% completion

- a condensed version of Robert Rusk's walk-through for "GTA III" with some of
my tips, PC-specific and otherwise

- a handful of modded handling.cfg files, and instructions on installation and
how to mod those files yourself

- Alper Saracoglu's Administrative Console, a couple of files you can add to
the Program Files > GTA3Console folder to give it a lot of extra teleport loca-
tions, and instructions on installation and how to add teleport locations your-
self

- YoYo's 1957 Chevrolet Bel Air convertible, related files I modded, and in-
structions on how to install them and mod such files yourself

- starter save files for the "GTAIII XBOX Version" mod by rmws

- files modded to increase clipping distance, draw distance, and diminish fog,
and instructions on how to install them and mod such files yourself

- "Sitting Duck Gangs"--my variation on the mod to prevent gangs from attack-
ing Claude which makes it easier for him to attack them, too, and instructions
on how to install the pedstats.dat file and mod it yourself

- links for a lot of the mods, tools, videos, etc., and my explanations for
gimmicks and secrets, etc.

Jan., 2011 update: I added "Mafia Titanic Posters and Billboards, " which
lets you add the Tommy Angelo version of the "Titanic" movie poster featuring
the "I'm flying" scene, and my explanations about how you can mod many such
files yourself.

Jan., 2016 update: I refreshed the links, added to the mod section, added details to the walkthrough, etc.

This is a video of a modded "GTA III."  The handling.cfg figures for the super
Rumpo and YoYo's 1957 Chevrolet Bel Air, which I used to replace the Idaho, are
from "Glenster's GTA III Starter Package."  Most scenes feature the "GTAIII XBox
Version" mod by rmws, a few scenes feature "Max Pain's MODDED GTA3 v2.0" by Max
Pain aka Nemo, and one scene features my "Mafia Titanic Posters and Billboards"
mod.

Joey gives Claude the mission to rescue Maria.  Claude does stunts with the
super Rumpo and the 1957 Chevrolet Bel Air on the way.  Claude and Maria stay
together and he celebrates with stunts in the li'l Dodo, the super Rumpo, the
'57 Chevy, and one stunt with the Borgnine taxi.

How to add working VC-style flying vehicles to "III"

SilentPL's "III Aircraft" is a CLEO mod that gives "III" a full winged Dodo
and working aircraft from "Vice City" and "Vice City Stories.  As of 2013 (and
not counting the "Liberty City Mod" for VC), SilentPL is the first to supply the
flying ability of later GTA's for "III."  It was partly done by improving on
some buggy flying code that was left in the .exe.  Here's a review by Craig Kos-
telecky: "Damn Silent, you NAILED it."
http://gtaforums.com/topic/568680-iiirel-iii-aircraft/
http://www.gtagarage.com/mods/show.php?id=24533

Have Claude collect the six packages dropped by the non-solid full wing Dodo,
hurry to the dock for a car to take to the Pay 'n' Spray to get rid of his
wanted level, go to Donald Love's place to complete the mission, start "Grand
Theft Aero" there, and make haste to the west-east runway at the airport to go
eastward.  The Dodo lands and taxis (wheels in the ground) to disappear at a
northern hanger (by a Panlantic van) where there's a solid Dodo with clipped
wings.
"Grand Theft Auto III - Secret Car Walkthrough Part 10.7 - Unobtainable Dead
Dodo" by MattJ155
https://www.youtube.com/watch?v=9yjrdQm5_ts