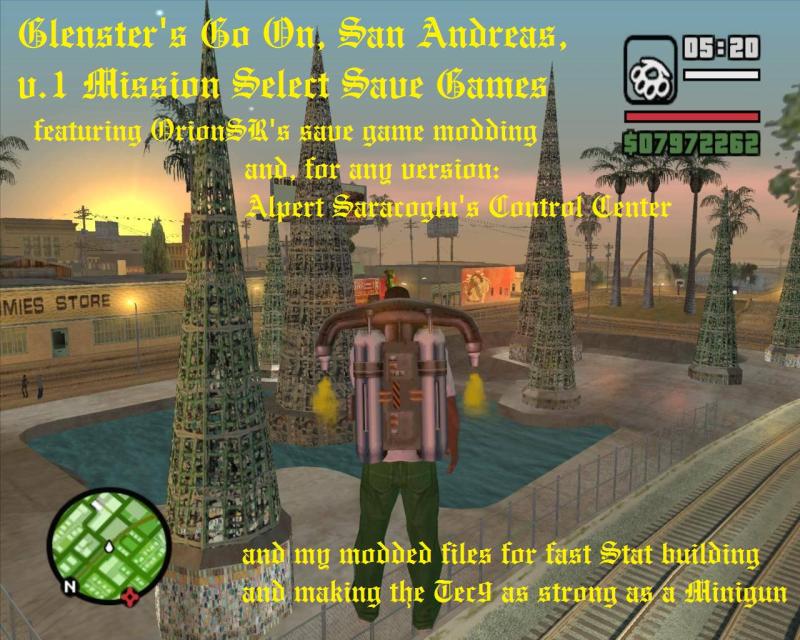 I added the documentation for the Control Center.

I added Alpert Saracoglu's Control Center (see the "ControlCenter" folder) and
updated the screenshots for this package.  A special thanks to Alpert Saracoglu
for giving me the permission to distribute his Administrative Consoles and Con-
trol Centers.  They're on a short list of things many of us want to supplement
our GTAs.

I added a save game, 0_InTheBe_GTASAsf1.b, for those who want the extras added
in April, 2008 and practically nothing else done.  It has EP versions of the
better sports cars and motorcycles in garages, an EP Rhino in the Santa Maria
garage, and an EP Seasparrow on the Mulholland garage roof.  C.J.'s weapons are
Fist, Molotovs, a Minigun, a Sniper Rifle, an M4, an SMG, a Combat Shotgun, a
Desert Eagle, and a Bat.  C.J. has a lot of ammo, several save places, Hitman
for Pistol, Gangster for Machine Pistol, a few of his body Stats have been in-
creased a little bit, and he has a little over $110,000.

I added a lot to C.J.'s ammo for both initial save games, the last save game,
and files 14, 30, 45, 59, 73, and 100 (usually where I thought someone might
want to go on a run of shooting missions--after a school and before the terri-
tory takeover).  There's more ammo available otherwise, too (see below).

OrionSR and I deliberated on some new features to add to this edition--a spe-
cial thanks to OrionSR for writing the Darkpactor code for it.

Maximum Armor is increased by 100 (200 before the Vigilante mission and 250
afterward).

The save disk in Madd Dogg's Crib has been moved to the northeast room of the
upper floor so you can save your game there without triggering the basketball
glitch.

The interior of the dance club in each of the three main areas, and the roof
of the Ten Green Bottles bar, have a Minigun, Heat-Seeking Rocket Launcher, M4,
Combat Shotgun, and Desert Eagle.

There are also a couple of the more personal gifts for girlfriends behind the
bar inside each of the three dance clubs.

The Ten Green Bottles bar is a couple blocks west and across the street from
the Johnson house.

(The five cane pickups in southwest San Fierro, and seven pickups that aren't
used in the game because they spawn in objects, etc., were deleted to make room
for the extra pickups.)

The Truth's crops appear and can be burned from the start of the game.

A Jetpack is available in each of the three main areas:
- by a tree in the alley behind the Johnson house
- on the south side of the Doherty garage
- in front of The Four Dragons casino

The Infrared Goggles will respawn.

An Andromada is parked by the southwest end of the Verdant Meadows runway.

The horizontal vent is open at Area 69.

Open interiors:
- Madd Dogg's Crib (north of the "AND" of "MULHOLLAND")
- Vagos Gang House (the north side of the block that's east of the block of
the Jefferson Hotel)
- Crack Den (northwest across two streets and a railroad track from the Los
Santos gym.)
- Zero's RC Shop (by the "C" of "GARCIA")
- The Pleasure Domes (under the south end of the Gant Bridge; don't have C.J.
exit through the roof or the graphics will be messed up
till he uses another interior)
- City Planning Department (north of the "L" of "COME-A-LOT")
- Sindacco Abattoir (the northeast corner of the block of the bottom of the
"EST" of "WHITEWOOD ESTATES")

Once you've completed "San Andreas," it doesn't let you pick from all the mis-
sions, but this collection of save games lets you do that.  There are two ver-
sions of an initial save game for v.1--inital LS things done, which the main
story mission save games proceed from, and initial LS/SF/LV things done.

An additional couple of files, compatible with any version of "San Andreas,"
are options that let you make the Tec9 as strong as a Minigun or let you build
Carl Johnson's weapon and vehicle stats quickly.  You can use them while using
the files described above or by themselves to give you a third way to play SA--
do it all yourself but have those skills develop quickly and have something like
a Minigun before the game would normally supply it.

I used the Control Center for a few things (most of the garage and hanger ve-
hicles, and the Sea Sparrow on the Mulholland save garage, are EP, DP, BP, and
FP for you even if you don't use the Control Center) to get advantages for the
initial save games before most of the garages and hanger are available and with-]
out sending C.J. to the Johnson garage and having him say, "Home--at least....",
to use territory where C.J. isn't legally allowed without a wanted rating or
cheat count, get through dating the girlfriends faster, etc.

Here are a couple of links to the GTA SA Control Center by Alper Saracoglu
with a vehicle spawner by Jacob.  There are a few tips on how to use it in sec-
tion X.13.c of "Glenster's Glimpse into San Andreas."
http://www.estetiksoft.de/
http://www.gtaforums.com/index.php?showtopic=198750&hl=GTA%20SA%20GXT%&st=0

No hospital visits, times drowned, busts, cheat count, or problem glitches.
Muscle, Stamina, Lung Capacity, and Total Respect maximized
Vehicle (including pilot's license) and weapon skills (Hitman) maximized
320 lbs. for the heaviest barbell used (C.J. is a mighty, mighty mountain man)
100 Tags sprayed (weapons at the Johnson house)
Sex Appeal is about 60% without a vehicle or clothes with a high Sex Appeal
and 100% with those things
Paramedic, Vigilante, Fire Truck, and Burglary Sub-missions done (C.J. has
maximum Health and Armor, is fireproof, and has the Infinite Sprint)
Pimping mission completed
No Unique Jumps done (they're optional; this way, if you do one, you can be
told if you did it right) except for the one done over the broken bridge in Pal-
omino Creek in "Small Town Bank"
The two triathlons, Lowrider Challenge, Big Smoke's Cash/Yay Courier, and
Beefy Baron aren't done (they're optional)
One or two levels of the dance game (also optional) are beaten, depending on
the save game, since it comes up during dating and I didn't want to drag that
out longer by having C.J. refuse dancing dates
All Los Santos save places bought

Garages (except for a few switches noted for later save files):

Johnson house: red Cheetah, red FCR900
Santa Maria: dark purple Turismo, light gold Bullet
El Corona: Hotring A and Hotring B (regular Hotring at LS Forum)
Mulholland: dark brown Infernus, green Mountain Bike, and a Seasparrow on the
roof (it's only visible when the garage door is open; the garage may "eat" it,
like a garage may do to a mod garage paint job, on some save games)

Verdant Meadows hanger: Hydra; Combine Harvester; you can spawn the Andromada
with the Control Center but it won't fit in the hanger, so I put the Hunter in
it in case you don't want to go for gold at Flight School for it.  (In later
save games C.J. has all gold for Flight School so I replaced the Hunter with the
Cropduster.)
You can use these links to get the Control Center and spawn an Andromada:
http://www.estetiksoft.de/
http://www.gtaforums.com/index.php?showtopic=198750&hl=GTA%20SA%20GXT%&st=0

Verdant Meadows garage: S.W.A.T. Tank, "Lure" Rancher
Fort Carson: Bandito (it's near Area 69, which is a little like Black Mesa,
and the Bandito is similar to Gordon Freeman's buggy in HL2)

A few vehicles (The Truth's Mothership, Pulaski's white Buffalo, a modded
Jester, the RC Cam, motorcycles, etc.) are added or moved in later save game
files.

The vehicles I saved in garages are explosion-proof, damage-proof, bullet-
proof, and fire-proof except for a few in the earlier save files (like the Los
Santos PCJ600 and the Hashbury Banshee).  Since they're in all the save files,
you don't have to treat them like garage trophies.

There are two versions of an initial save game made before any of the main
storyline missions are done--one with C.J. restricted to Los Santos ("BMX") and
another in which he entered San Fierro and Las Venturas ("DirtTrack").

The main storyline save games proceed from "BMX."  You can customize those any
way you like or start with "DirtTrack" and have more done as you make your own.

In both initial save save games, C.J.'s skills are maximized, he has the extra
Health and Armor, is Fireproof and rich, has the Infinite Sprint, and has an
arsenal of weapons.

C.J.'s Sex Appeal is maximized for both initial saves.  He only needs a sexy
vehicle for it to be 100%, and Denise doesn't care about C.J. Sex Appeal, so
there's no need to have all the Oysters while legally restricted to Los Santos.
C.J. dated the SF girlfriends without all the Oysters without a problem, too.
He's collected all the Oysters on 1b of the two initial save game files--other-
wise, they're all collected once C.J. gets to them legally in the save game
files that originate with 1a.

In both initial save game files, C.J. already has a lot of money and all the
property he can buy before the 1st mission.  There's no big need for him to have
a maximum Gambling stat, allowing C.J. the maximum amount he can bet on Las Ven-
turas gambling, to make money.  He only has the maximum Gambling stat on 1b of
the two initial save games--otherwise, that stat is maximized in later save game
files that originate wth 1a.

For initial save game 1a, I didn't have C.J. initiate dating with Katie and
Barbara, which lets C.J. keep his money and weapons if he has a hospital visit
or gets busted.  I don't save the game if C.J. gets busted or wasted, but if you
do, you might use 1b.

So you can use initial save game 1b if you'd rather have some extra things
done at the start of the game.  1a is the one the rest of the save games origin-
ate with, and I get all those things done on them, anyway.

To use a save game file, Copy and Paste it into My Documents\GTA San Andreas
User Files.  Rename the save game file to remove everything to the left of
"GTASA," and assign a save game slot to it by changing the number before ".b" to
the number you prefer from 1 to 8, picking a number that fills an empty slot.

For example, to use 3_Tag_GTASAsf6.b for the 4th save game slot, rename it to
GTASAsf4.b